North Cadbury Court is a stately country house located in North Cadbury, Somerset. Established approximately 700 years ago, this grade I listed-building has a long and interesting history. This article will take at look at its history and the people who lived in this magnificent country house.

The initial parts of North Cadbury Court were constructed in the 14th-Century when the de Moels built a medieval hall on the site. The original 700-year-old trusses used in this building can still be viewed in some rooms today.

The building was sold to William Botreaux from Cornwall in approximately 1337, the same year that the 100 Years War began between Britain and France. His daughter Elizabeth was a devout woman who was responsible for later rebuilding the neighbouring church in the earl 1400s. That church is a popular location for weddings today.

By the late 16th-Century, the building was owned by Henry Hastings, 3rd Earl of Huntingdon. He leased the property to his brother, politician and High Sheriff of Leicestershire, Sir Francis Hastings.

In the 1580s, Francis began building the large Elizabethan mansion that we see today. The new mansion included many of the features common with this type of architecture including an elaborate roofline, parlour rooms, withdrawing rooms, dormer windows, a central great hall and high chimneys.

click – North Cadbury Court is available for you to stay in!

In 1596, North Cadbury Court was sold to the Baron of the Exchequer, Matthew Ewens. In 1610 it passed hands again after being purchased by Richard Newman. Notably, Newman was imprisoned by Oliver Cromwell because he supported King Charles I. Luckily for Newman, he was later released by King Charles II!

The building stayed with the Newman family for approximately 150 years. During this time the gardens were improved and some architectural details were added to the house.

The Bennett family purchased the house in the 1760s and added some notable features including the Georgian south facade and the beautiful ballroom. The ballroom is a spectacular location for weddings and parties today.

North Cadbury Court changed hands for the final time in 1910 when the estate was purchased by Sir Archibald Langman. Langman had come to Cadbury from London and was interested in making a new start in a rural area. 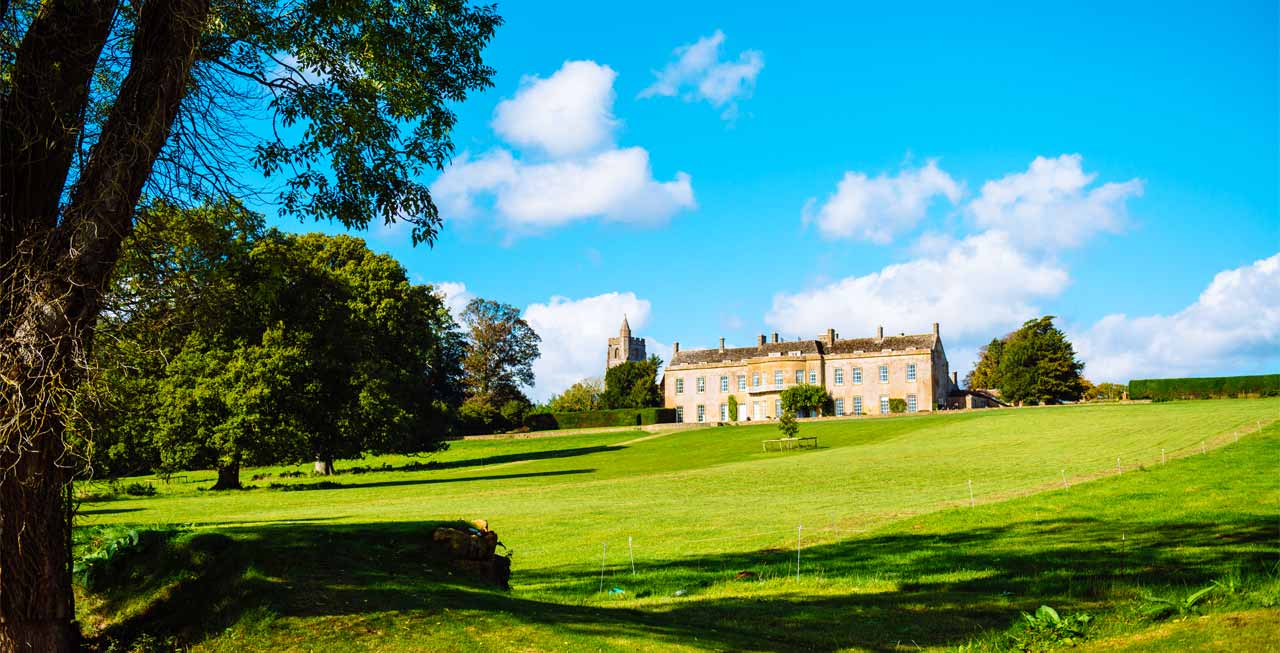 Archibald and his wife Eleanor developed a passion for farming and became very active on the estate. They started making the cheddar cheese which the estate is now famous for.

Archibald had a few famous friends including Sir Arthur Conan Doyle. They were briefly imprisoned together during the Boer war and continued their friendship for many years afterwards. Photographs taken by Archibald remain in place around the building.

The home has seen many other wars over the years including World War II, when it was used as a nursery after a hospital in London was evacuated.

The building has been put to other good uses over the years. It was also used by the YMCA to help underprivileged youth. Many young people who received training at North Cadbury Court went on to have productive lives throughout England.

Today, North Cadbury Court is one of the most beautiful events locations in the United Kingdom. The building has 21 bedrooms, a magnificent ballroom, many cozy lounge rooms and a stunning entry way, which makes it a much sought-after wedding reception location. Each room is filled with antiques that have been collected over hundreds of years, reflecting the age of this magnificent building.

Recent renovations have continued to add more features to the building, including a swimming pool, snooker room, disco room and casino. The gardens are spectacular and make the perfect location for an outdoor lunch or dinner. North Cadbury Court is one of the gems of Great Britain and you are guaranteed to fall in love with it!