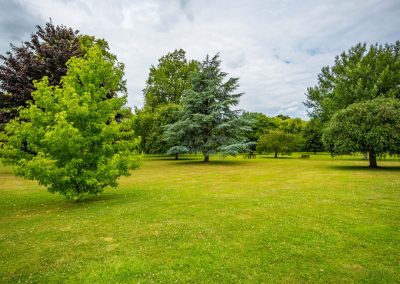 The Elvetham commands an impressive position in the heart of its 4,000 acre estate, with a long history of hosting lavish occasions, it is the perfect choice for those looking for a venue to inspire and captivate their guests in beautiful surroundings. The venue offers complete privacy, outstanding service and superb flexibility to create a truly bespoke and memorable event.

The Elvetham dates back to 1086 with a mention of the estate in the Doomsday book. Some 200 years later, The Elvetham became home to the Seymour family and became a place for hosting eminent guests, including King Henry VIII who met and later married his third wife, Jane Seymour at The Elvetham. In 1591, the Earl of Hertford entertained Queen Elizabeth I here, and the oak tree she planted to commemorate the occasion still stands in the grounds and is now more than 33 feet in circumference. The house as it stands today was built in 1860 following a fire that destroyed the original house, designed by the noted ecclesiastical architect Samuel Sanders Teulon, and the beautiful formal gardens created at this time. 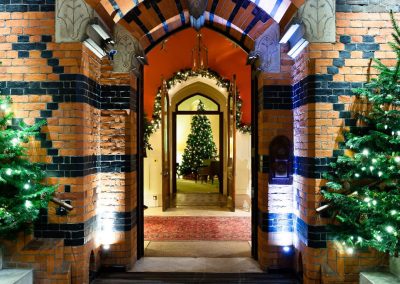 The approach via its long private driveway creates an enchanting entrance, with the magnificent historic architecture slowly revealing through the trees, blending perfectly with the 35 acres of manicured grounds. The house today is full of splendour, with the mighty carriage porch and front door setting the scene for what is to come. The vast ceilings and abundance of natural light create a sense of grand proportions, with beautiful fireplaces and chandeliers throughout. 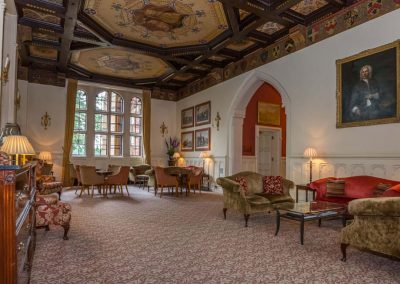 The spacious hall forms the heart of the house, with a beautiful seating area at the entrance along with a magnificent stained-glass window. The hallway leads to a large vestibule area next to the Library, the largest of the reception rooms, offering a useful space for buffets or refreshments.

The Library’s huge stone fireplace, intricate ceiling and beautiful antique bookcases create an elegant setting for seating up to 120 guests for dining or up to 200 for receptions, with air conditioning and its own dedicated kitchen this is the perfect setting for banquets and private dining, although can be adaptable to meetings and events with three breakout/syndicate rooms that can be accessed from the Library. 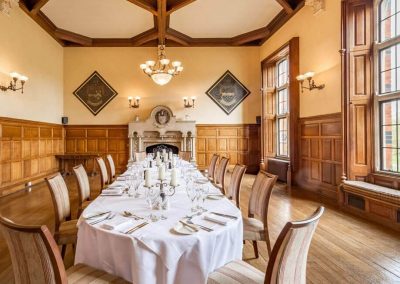 The Oak Room sits alongside the Library, with its vast windows it is a beautiful light and airy room and also features a stunning original fireplace, making it wonderfully cosy in winter time. There is ample space for 60 people to dine or up to 120 for receptions. The Oak Room and Library can interconnect to form a suite of rooms, and there is a lovely breakout space in the Grand Hall perfect for use with the Oak Room. 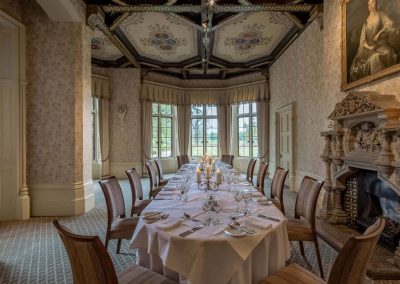 The Morning Room is another stunning room which overlooks the formal gardens, with the most amazing hand carved stone fireplace and ceiling. The Morning Room seats 50 for formal dining or up to 120 for receptions, and provides direct access to the terrace and grounds along with a door to the adjacent bar. 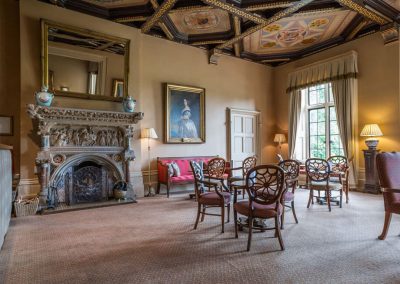 The Drawing Room Bar is a lovely light room overlooking the grounds and again provides direct access to the terrace, with plentiful comfortable seating and a fully stocked bar. The Restaurant leads through to the beautiful Conservatory, flooded with natural light it provides a blank canvas to any event, with lovely views over the gardens it can seat up to 100 people for dining or up to 120 for receptions, and can be split into two rooms if required.

From November to January there is also the Winter Conservatory, attached to the main house this versatile space can seat up to 320 people, and offers its own bar, stage and dancefloor along with lovely views over the manicured gardens. 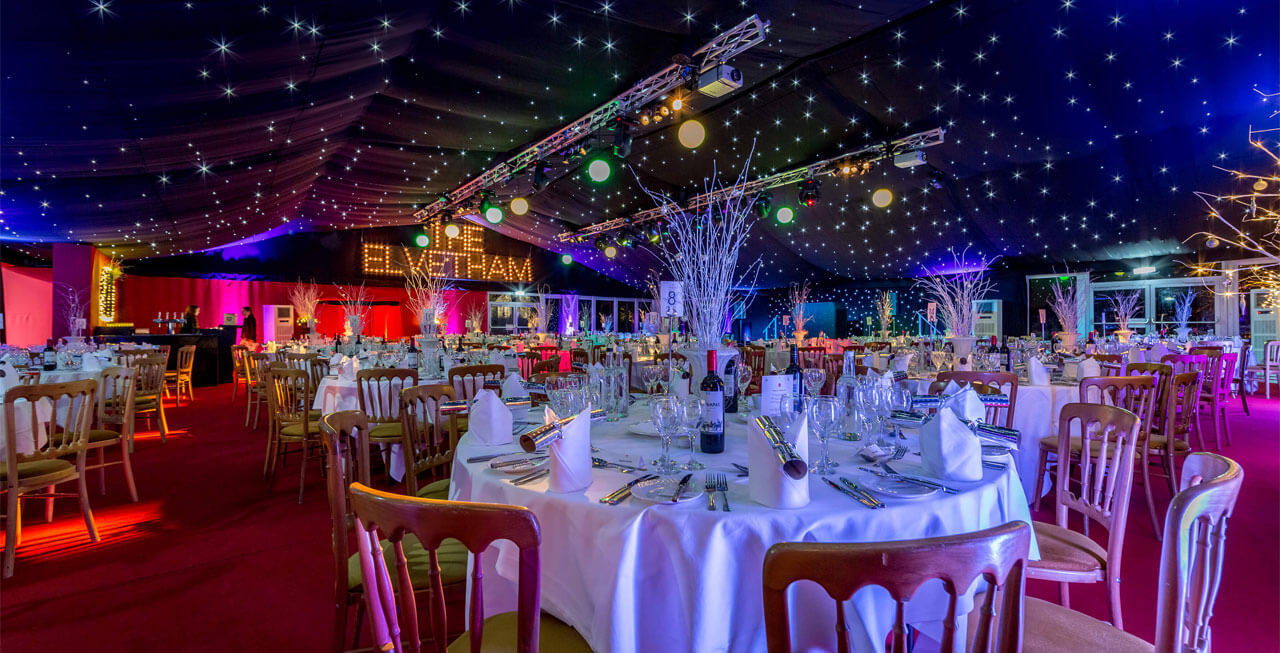 The elegant gothic Staircase sweeps to the first floor past stunning stained-glass windows, with hand carved balustrades and beautiful artwork adorning the walls. The Seymour meeting room is situated on the first floor, with its dual aspect windows and it provides a very light room with beautiful views, and benefits from air conditioning. The Seymour Room can seat up to 43 theatre style or up to 60 for receptions, and has a small adjacent Study to seat 6 people Boardroom style.

There are 43 bedrooms in the main house, many with lovely original features, including ornate windows and stone fireplaces. Due to the historic nature of the property, rooms do vary in shape and size, however all are comfortably appointed with en-suite bathrooms, tea/coffee making facilities and there is free WiFi throughout. Several of the rooms can be arranged as double or twin, and the Large Garden View rooms are particularly spacious, offering an indulgent experience. 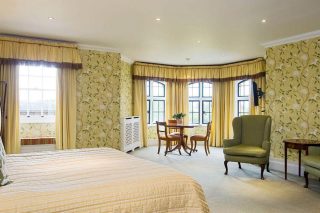 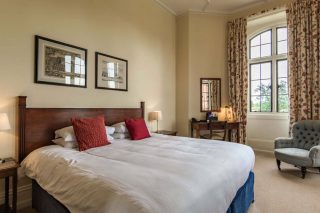 The remaining 29 en-suite bedrooms are located in the Court building, situated just a few hundred yards from the main house this used to be the coach house and stables. There are a range of single and double bedrooms, and also two accessible bedrooms with a wet room and walk-in shower. 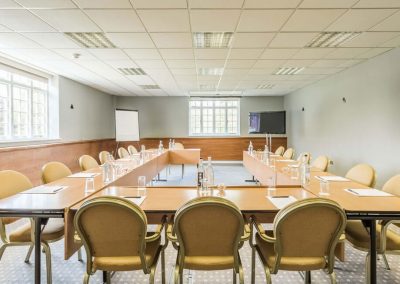 The Court building also offers a small gym, a coffee lounge and several purpose built meeting rooms ideal for meetings of between 12 – 68 guests; the Court Room, Carriage Room, Hart Room and Turf Room, along with several Syndicate rooms, all with magnetic walls and AV capabilities. 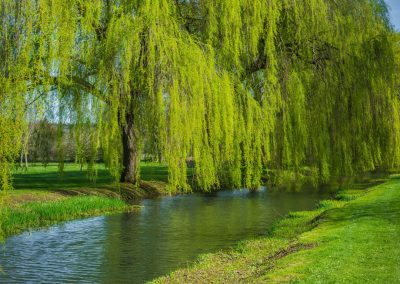 The 35 acres of grounds offer an idyllic setting for summer soirees, elegant drinks receptions and weddings, with a summer house in the grounds licenced for outdoor wedding ceremonies. The spacious terrace is furnished for al fresco dining and BBQs and hog roasts are available, or simply enjoy a refreshing cocktail on the terrace overlooking the formal gardens towards the sunken garden. 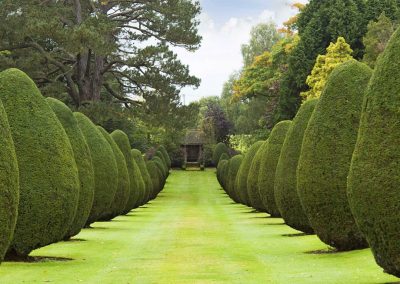 There is a beautiful yew tree avenue dating back to 1860 leading to the summer pavilion, and there is a croquet lawn, putting green and boules area available along with garden games. The estate also offers a tennis court and a separate activity lawn perfect for team building events and country pursuits, and there is a further field available for motorised sports if required.

There is ample complimentary parking on site and a helipad available on request. The Elvetham Estate extends to some 4,000 acres.