The Manor Elstree is a magnificent black and white Tudor-style building dating back to 1540, set in ten acres of private woodland and gardens, yet just thirteen miles from London or a 20 minutes train journey. Its hillside location provides far-reaching views over the English countryside to the city. A sweeping driveway brings you past mature trees and woodland, and through the Manor’s grounds with their beautifully kept herbaceous borders, which provide a riot of colourful flowers in season. 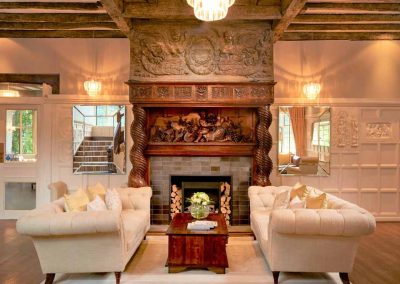 Step through the wooden portico into the spacious lobby and the house begins to reveal itself. The intricately hand-carved Italian fireplace, wooden ceiling beams and grand staircase provide a truly impressive entrance to welcome guests, with sumptuous sofas and buttoned Chesterfields to make you instantly feel at home. 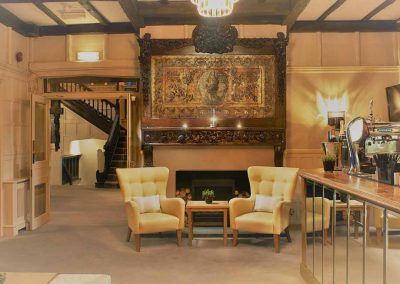 The sixteenth century origins of the Manor are clearly evident in its carved wall panelling, mullioned windows with leaded lights and ancient beamed ceilings, with some of the wood taken directly from ships in the battle of the Spanish Armada. This beautiful blend of the contemporary and historical features results in light and elegant, characterful public spaces to wow you and your guests.

The polished wooden floors and twinkling chandeliers of the lobby give way to subtle plaid carpeting, which leads through to a suite of public rooms.  White panelled walls and abundant natural light filtering through feature windows balance the striking stained glass and heavy silk curtains. The Restaurant overlooks the front of the property, and provides a highly versatile space, being ideally suited either to a boardroom meeting or dining for up to 24 guests.

Step across the hall to the Regency Room and you’re immediately drawn to the large bay window opposite. It’s here that the splendour of The Manor’s location is revealed. The Cavendish Room, Regency Room and Terrace Bar all benefit from magnificent views down over the Manor’s terrace, gardens and grounds. 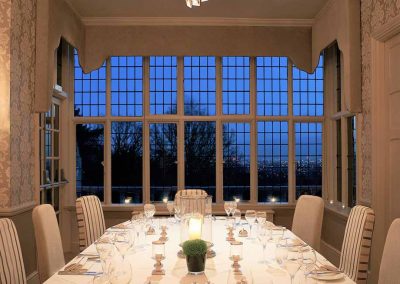 Beyond that, it seems that the whole of London is laid out for your pleasure. Through the trees, you can spot landmarks such as the London Eye and the Shard and the view is particularly spectacular at night, with the lights of the capital city twinkling silently in the distance.

The Regency Room is perfect as smaller dining room or meeting room. Two sets of double doors link it to the Cavendish Restaurant, which also features bay windows and access to the terrace. The restaurant can be laid out either for private celebrations; for banquets to entertain business delegates or as additional conferencing space. For larger events, exhibitions or family reunions, double doors connecting the rooms overlooking the terrace can be opened out to create linked spaces. 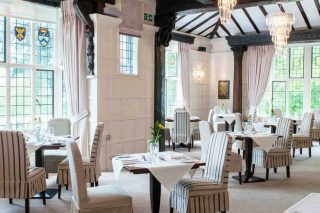 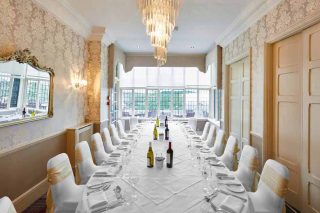 The glamorous LA Bar is just the spot to relax with a pre-dinner cocktail, full of character with a set of wooden panels made from ships lockers.

The welcoming lounge offers leather chairs, cosy corners and a fine selection of whiskies and liqueurs. On a balmy summer’s evening the temptation will be to venture outdoors and enjoy a cool drink or afternoon tea, while drinking in the views from the terrace itself. On cooler days, enjoy a warming hot chocolate or coffee by the roaring fire in the lounge with the newspapers or a good book, after a bracing walk in the Manor’s grounds.

A stay at The Manor Elstree is an opportunity to indulge in fine dining in the 2-rosette Cavendish restaurant, with its English specialities, lunch dinner and afternoon tea. The restaurant is elegantly dressed in signature Laura Ashley furnishings with polished silverware and bone china. Enjoy the carefully selected wines from the cellar to accompany food that is stylish, pleasing to the eye and above all tasty, using fresh, local ingredients. 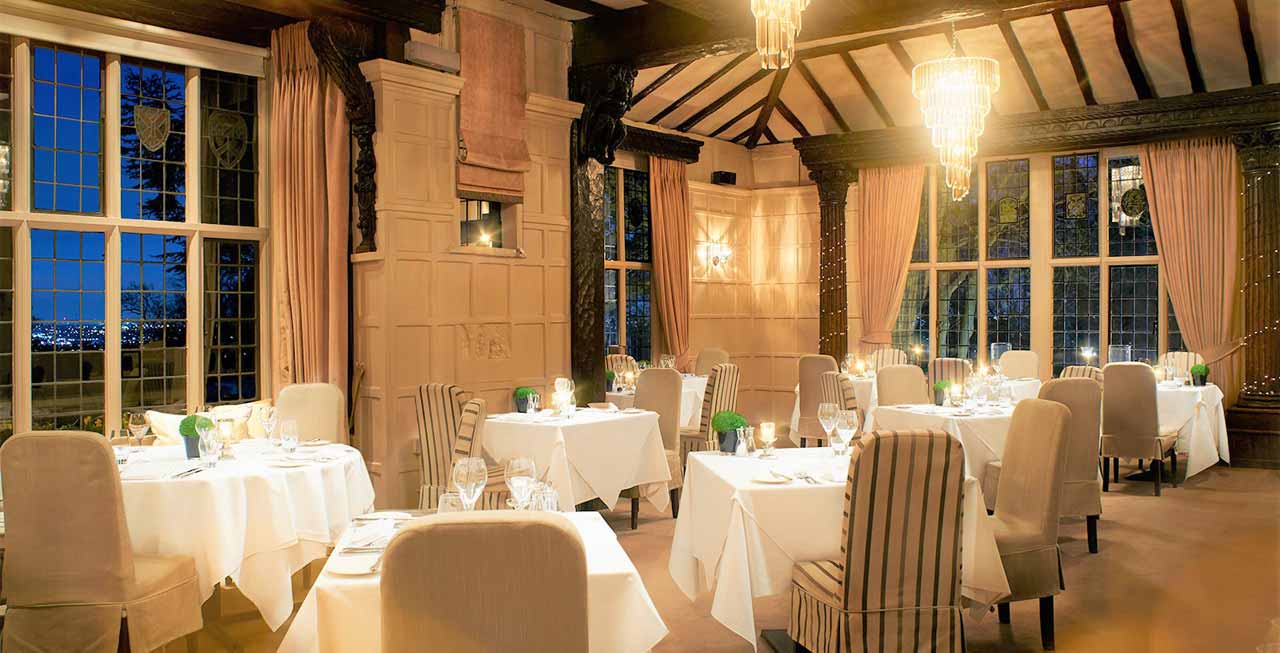 Each of The Manor Elstree’s five conference suites is light and airy, with contemporary furnishings and air conditioning for your comfort. From the lobby, a flight of stairs leads down to the Arkley Room, while an internal walkway leads to a new wing set into the slope of the terraced gardens. Here you’ll find the boardroom, and two modern meeting rooms; the Aldenham and Brockley rooms. Up to 84 delegates can be catered for and there is space for up to 150 guests for receptions. 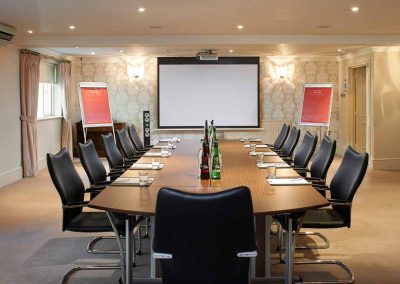 The Manor’s staff will coordinate with you to ensure that all the necessary AV and presentation technology in place, including complimentary WiFi, so that your event proceeds smoothly. There’s ample car parking and catering, including 2-rosette fine dining and banqueting, is seamlessly incorporated into your stay, including considerations for special diets.

There are 49 ensuite bedrooms at Elstree, all beautifully decorated and individually furnished in Laura Ashley’s signature British countryside style. Sweet dreams are practically guaranteed as you sink into your comfy bed, with its quality linens. 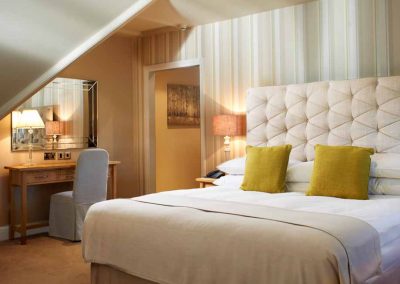 Business guests will appreciate the convenient work station to rattle out an email before starting the day; there’s complimentary WiFi, making it easy to stay in touch with family or the office. 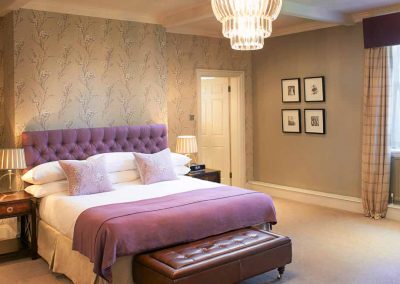 The Manor’s bedroom suites are impressive, featuring sitting areas with armchairs and sofas where you can take a moment to relax or chat with family or your colleagues. Suites are located on the upper floor of the main house and enjoy spectacular views over the countryside toward London.

The bridal suite features a four-poster bed and dressing area to don your wedding finery for that most romantic of days. The Manor Elstree is licenced for wedding ceremonies of up to 86 guests and a maximum capacity of 120 guests for the wedding breakfast.

From the main Manor building, a glass walkway leads to the contemporary wing of the Manor, where further accommodation awaits. The superior double rooms enable you to enjoy an early morning cup of tea or a sundowner on the terrace overlooking the grounds. 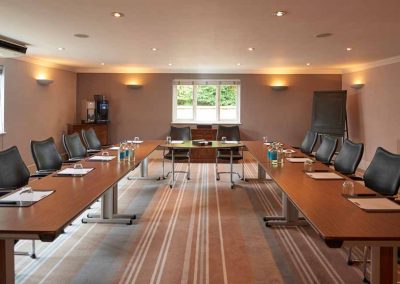 The Manor Elstree’s conference suites offer flexible accommodation for training sessions, business meetings and seminars, with capacity for up to 84 delegates, with break-out rooms. The tranquil location lends itself to focused thinking, away from the distractions of the office and without the daily commute. Here you’ll find plenty of comfy nooks to hold impromptu discussions outside your meeting or to relax and decompress.

The rural location notwithstanding, London is within easy reach, making the Manor accessible for day delegates as well as residential attendees. 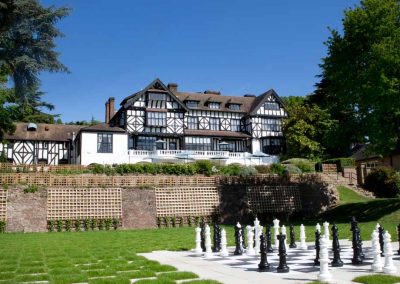 This is also the perfect venue for product launches and corporate social events in the grounds, which extend to 10 acres with a true English country garden feel with a beautiful Rose Arbour leading from the manicured lawns to the pond. There are sunny terraces perfect for al fresco dining or drinks receptions, and the giant chess set keeps kids of all ages entertained.

The Manor Elstree is completely enclosed and private in its own grounds but there are plenty of things to do and see nearby, from idyllic country pubs to woodland walks and hidden nature reserves, including Stanmore Country Park just one mile away. Radlett Park is a golf club with a view, as well as some tricky par 4s and water features on the back nine. The nearby Aldenham Park is a paradise for coarse fishing enthusiasts, while aviation fans are spoilt for choice with Bentley Priory aviation museum and the RAF Museum at Hendon. An exclusive stay here allows you to enjoy the benefits of the Manor’s English countryside setting while just a short hop from London.

Elstree is easily reached by rail, along the Thameslink line from St Pancras. Arrivals by private jet or helicopter can be arranged at the nearby Elstree aerodrome and heliport, and private transfers are available on request.