Brocket Hall is set in a stunning 453 acre estate, offering seclusion and tranquility yet only 45 minutes from central London. This magnificent stately home is the epitome of English country living, with a rich and illustrious history dating as far back as the 13th century encompassing some of England’s most important historical figures.

Today, Brocket Hall is offered as an exclusive use venue for private social functions and corporate events, with an elite team to ensure you experience the very best in traditional English hospitality from start to finish. Butlers will be discreetly on hand during your stay to anticipate your every whim, and ensure you experience traditional ‘country house’ life to the highest standards.

The opulence and grandeur of Brocket Hall is breathtaking, with all of the elegance and style of its 18th century glory still very much evident today. The immaculate interiors, beautiful period antique furnishings and original oil paintings create a very special atmosphere, yet discreetly offers every convenience to satisfy the most discerning 21st century guest.

Relax in the beautiful Morning Room; with elegant furnishings, exquisite paintings and beautiful views over the parkland this is a magnificent setting for pre-dinner cocktails with an accompanying pianist to create a wonderful atmosphere.

Enjoy lavish parties and decadent feasts fit for a king in the spectacular Ballroom, furnished to entertain royalty with the second longest table in England (second only to Windsor Castle), and the very room that Lady Caroline Lamb introduced the Waltz to England.

More intimate meals can be taken in the delightful in the Dining Room, with steps down onto the Well Lawn it is the perfect choice for summer events. The Family Dining Room adjoins this room offering a lovely space for lunches or smaller dinner parties.

The Library offers a great place to relax with a good book or enjoy good company, with a stunning ceiling designed by Cipriani and beautiful ornate bookcases commissioned specifically for the room by Chippendale. This room can be the ideal setting for smaller meetings or intimate entertaining.

Step back in time with the fun and frivolity of the Billiard Room, the perfect place to unwind in much the same way as centuries before. Enjoy a glass of vintage port or single malt whisky and mull over the days’ events in beautiful surroundings.

The 30 luxurious bedrooms all offer en-suite bathrooms; with fine art, beautiful antique furniture and supremely comfortable beds to ensure a perfect nights’ rest. Each room bears the name of a notable figure associated with the house and is individually styled to reflect the character of that person, such as the Prince Regent suite, commissioned by the Prince himself it is furnished in the “chinoiserie” style including exquisite hand painted wallpaper and oriental artefacts.

Also available within the grounds of the Hall is Melbourne Lodge, the original 18th century stable block converted into 16 bedrooms. The bedrooms all offer beautiful en-suite bathrooms and many have stunning views over the Broadwater and the Estate. 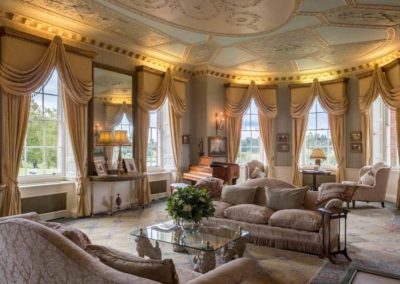 There are many activities that can be arranged within the grounds of the Estate, from traditional country pursuits to motorised sports. Adjacent to the Hall is the croquet lawn and beyond that, the tennis court, with a beautiful Edwardian thatched pavilion from which to watch the action, with a glass of Pimms and strawberries in hand.

Brocket Hall has been used throughout history for many high profile business meetings and secure political summits, and today it has gained an international reputation as one of England’s premier business venues for meetings, conferences, seminars, product launches and team building retreats.

The spectacular limed oak Boardroom is equipped with solid oak tables and specially commissioned leather chairs to ensure the comfort of delegates. There are excellent meeting facilities for engagements of all sizes, with only the highest standards of security, discretion and professional service as befits a venue of Brocket Hall’s stature.

The beautiful estate provides ample opportunities for team building, company incentives or corporate golf days, with many activities available within the grounds or on the estate’s two championship golf courses. Finish off the day with fine dining set in the splendour of the Ballroom, with a vast banqueting table used by the then Prime Minister Lord Melbourne to entertain royalty and heads of state. Brocket Hall delivers culinary excellence thanks to its elite team of chefs, lead by executive head chef Phil Thompson, who was awarded a coveted Michelin star in 2009. 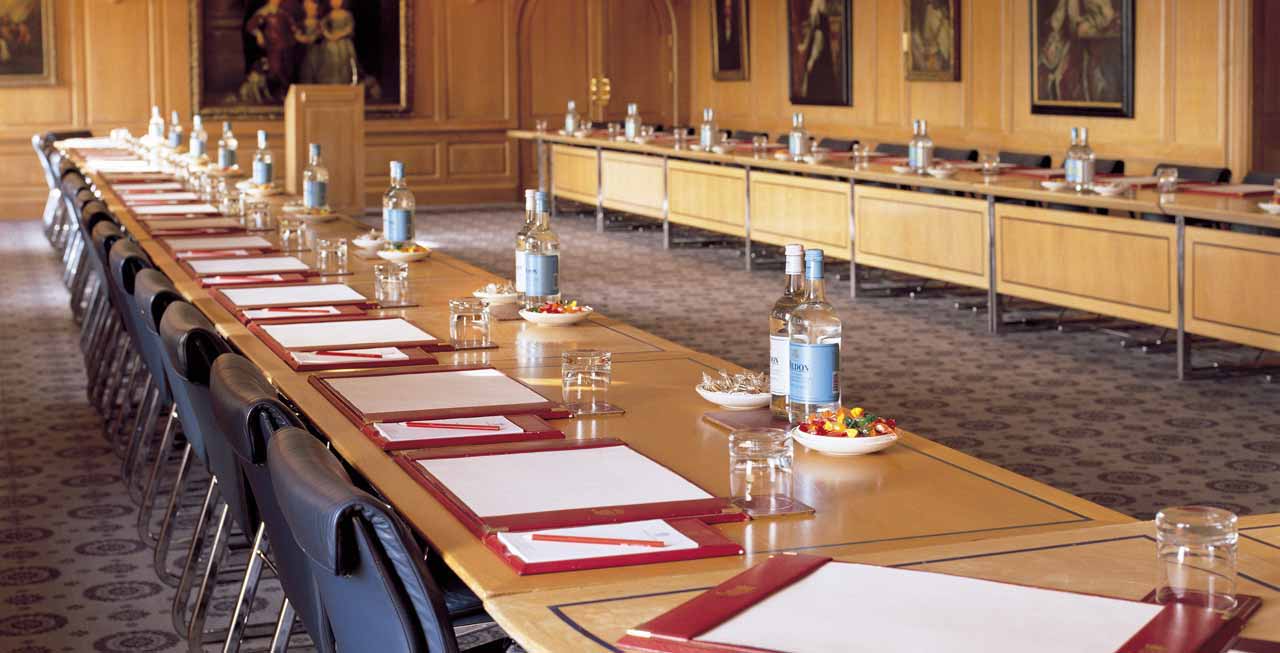 Celebrate in style at Brocket Hall, from intimate dinners with close friends to lavish parties to mark one of life’s many milestones; you can be confident that your event will be everything you want it to be. The Hall can be exclusively yours for a day, week or month; fully staffed with butlers to anticipate every whim and a team of chefs delivering only the highest culinary standards.

Brocket Hall offers a vast array of stunning function rooms, whether you are inviting 15 or 150 guests. From the opulence and splendour of the Ballroom to the beauty and elegance of the Morning Room, there are places to relax with friends, celebrate with family or chat away into the night. And, at the end of the evening, retire to one of the 30 luxurious en-suite bedrooms, exquisitely decorated and furnished for a truly restful experience.

Enjoy the freedom of the entire estate, walk in the footsteps of royalty and relish the experience of English country living at its very best.

If you are looking for a traditional English wedding venue in a grand and beautiful setting, there is no finer choice than Brocket Hall. Set in 543 acres of beautiful parkland, the Hall is a licensed civil wedding venue and creates stunning backdrop for the most important day of your life.

The Hall itself is stunning, created by the noted architect Sir James Paine, it is an exquisite example of a quintessentially English stately home. The Hall has hosted many eminent figures throughout history, including King George IV and Queen Victoria, and is now available as a luxury wedding venue just 45 minutes from central London.

Brocket Hall is fully staffed to ensure your day is perfect, with outstanding cuisine and professional, discreet service, so you can relax and enjoy your special day with the ones you love. 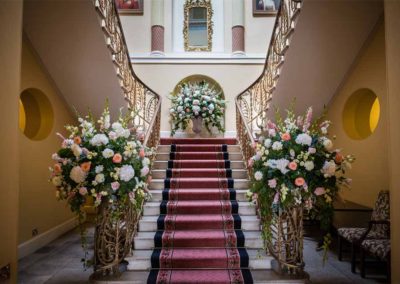 Step inside and experience all of the elegance and splendour of a bygone era, from the romantic opulence of the Ballroom to the beautiful bedrooms, you will find a truly special venue that you and your guests will cherish for years to come.

The origins of Brocket Hall can be traced back to 1239, when Simon Fitz Ade owned the house, then called Watershyppes. One of Fitz Ade’s daughters married Sir Thomas Brocket, and the Brocket family moved from Yorkshire to make Hertfordshire their permanent home.

By the 1500s, the Brocket family had established themselves as one of Hertfordshire’s premier families, with Sir John Brocket a close ally of Queen Elizabeth I. Indeed, it was whilst the young Elizabeth sat under her favourite oak tree in the grounds of the Brocket Hall Estate that she was informed of her rise to the throne following her sister Mary Tudor’s untimely death.

In the 1700s, with no male Brocket heirs, the house was sold to Matthew Lamb, who was eager to gain a country seat for his family. In 1760, Lamb engaged Sir James Paine, the renowned architect, to design a majestic new Brocket Hall to replace the previous structure, and is responsible for the beautiful home that Brocket Hall is today.

Matthew’s son Peniston went into politics and rose through the ranks; largely thanks to his wife, the then mistress to the Prince Regent. The Prince, later to be crowned as King George IV, frequently visited Brocket Hall and even created the Prince Regent Suite, still used by guests at the Hall today. Peniston was eventually awarded the title Lord of Melbourne, which, along with his vast fortune, upon his death passed to his second son, William Lamb.

William Lamb devoted his life to politics, and despite the scandal that marred his career following his wife Caroline’s affair with the esteemed poet Lord Byron, rose to become the British Prime Minister in 1834. William was one of the closest political advisors to Queen Victoria, who ascended the throne in 1837, and she subsequently became a frequent visitor to Brocket Hall.

Following William’s death, the house passed to his sister, Lady Palmerston, who by then had married Henry John Temple, 3rd Viscount Palmerston, who was British Prime Minister from 1855 – 1858 and again from 1859 – 1865. Brocket Hall was once again home to the Prime Minister who remained at the Hall until his death just two days before his 81st birthday, rumoured to have been precipitated by a fumbled liaison with a maid on the billiard table!

By 1923 the house had been purchased by Sir Charles Nall-Cain, who in 1933 was eventually made a peer and became the first Lord Brocket, taking the name of the eminent home he had purchased to affirm his own claim to aristocracy. The current Lord Brocket inherited the house and title in 1967, with the first golf course built in 1992 and named after the second Lord Melbourne.

In more recent times, major improvements have been added to the Estate, including a second championship golf course, the Auberge du Lac restaurant (one of the most influential restaurants outside of London), and the renowned Palmerston Golf Academy.